Chaetodontoplus meredithii, also known as the Meredith’s angelfish, is a species of marine fish that is found in the tropical Western Pacific Ocean, specifically in the Philippines, Indonesia and the Great Barrier Reef. It is a member of the Pomacanthidae family, which includes other angelfish species. The Meredith’s angelfish is a medium-sized fish that can reach up to 20 centimeters (8 inches) in length. They are known for their striking coloration, which can range from blue, yellow and orange. They have a yellow tail and a blue ring around the eyes. Juveniles have a different coloration, they are black with blue spots and a yellow tail. These fish are typically found in rocky reef environments and are known to be territorial. They feed on a variety of invertebrates, including sponges, tunicates, and corals. Meredith’s angelfish are not as common as other angelfish species in the marine aquarium trade and are considered to be best suited for experienced aquarists.

Only 1 left in stock 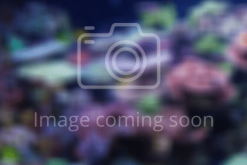 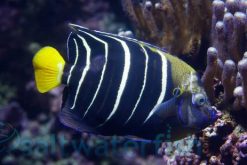 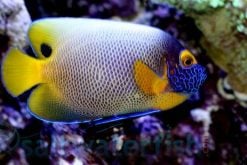 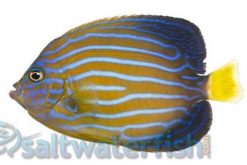